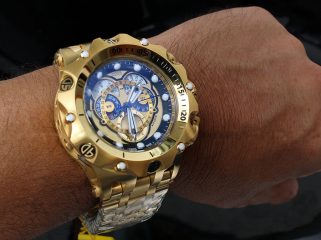 Wearing watches on the left wrist?

Ever since I was little, they always instilled in me the golden rule “the clock always goes on the left hand”, but as I am very curious, I went to the task of investigating this Canon of watchmaking, and I found the reason !.

We have to climb the time machine and travel to the nineteenth century, very specific to Switzerland, cradle of watchmaking. Date and place where the earliest manufacturers of wristwatches in the world were designing the first pieces of what will be a cult industry, pausing in history and as a curious fact, I can add that these early models were directed solely and exclusively To a female audience.

Already with this nascent industry on the map, and with the subsequent arrival of World War I, were the ingredients for men to dare to wear watches on the wrist, since men of the nineteenth century preferred above all, the Pocket watches, to the extent of modifying the dress by putting specific pockets for the watches on the vests on the left side, laying the ground unconsciously for this tradition, as it was easier to manipulate the watch with the right hand.

Time later, entered the twentieth century, and after this common use of pocket watches on the left side, was a Brazilian pilot, friend of a famous watch manufacturer, who commissioned a watch that could visualize without problems when he piloted his airplane , And it was what set a trend in the fashion of the time, this and the need to coordinate military operations, which made the leap of an invention unique to women, as were wrist watches, a need for the most Combative men of the time.

And it was this moment in the history of mankind, which ended up putting in our style the use of clocks on the left side, either for the convenience and versatility of a mostly right-handed society, making this common practice for right-handed people.

No Responses to “Wearing watches on the left wrist?”